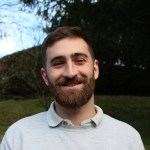 Byron joined St Peter’s in September 2015 as a maintenance assistant.

We are delighted to announce that Byron has recently qualified in Building maintenance and multi-trade skills, achieving his NVQ 2 Diploma certificate. Byron began his apprenticeship at Pathfinder in Newton Abbot but completed it here at St Peter’s Preparatory School. Not only is Byron a member of staff at the school, but he is also a parent with his son being a pupil in one of our Nursery classes.

Byron joined the Navy at 16 and was enrolled for seven and a half years. On leaving the Navy he has had a number of jobs in the building trade. A typical day for Byron at St Peter’s might include: dealing with heating requirements and electrical issues; fixing broken door locks; maintaining the swimming pool; erecting fences; securing the school site after drop off in the morning and painting the school, particularly in the holidays.

Byron got married in December 2015, shortly after starting his job at St Peter’s and, as well as his own son, Byron is a step-father to four children. In his spare time, Byron plays 11 a side football for Newton United.