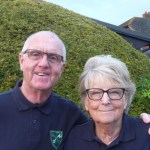 Mike joined the team at St Peter’s at the start of the Michaelmas term 2017 and Hazel will be joining the staff in November after this half-term.

They have been married for 52 years and moved to Devon in June of last year. Their daughter, Kim, Hazel’s mum – aged 99 – plus Jack, the family dog, all came with them.

One of the reasons for this was to be nearer Kim’s twin brother Matt (coincidentally he is a primary school teacher) and his wife who live at Budleigh Salterton and also to fulfil a dream that they have had for many years, which has been to live by the sea.

They have now realised this dream, and live in the centre of Exmouth only five minutes walk from the beach.

Mike comments: “Although we have different areas of the school to clean, Hazel and I will be working together as a team to help each other and aim to clean to a high standard. Hopefully, without too many disagreements (hahaha). We are both looking forward to being part of the team at St Peter’s.”