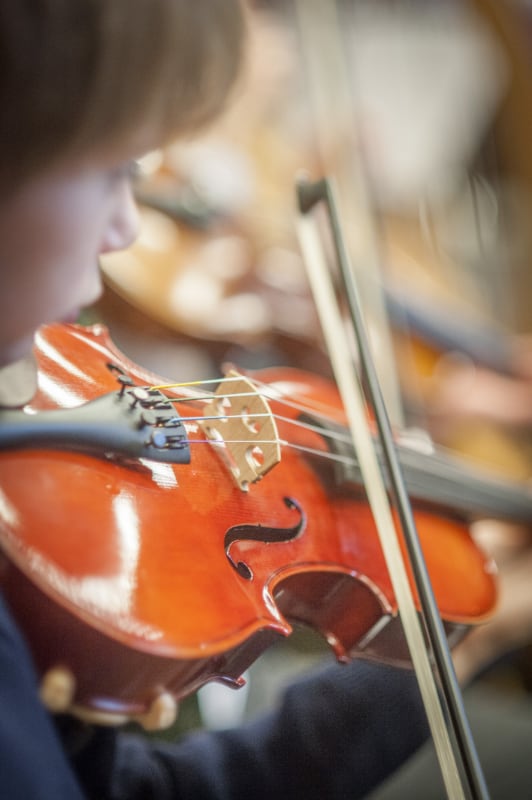 On 8th February a group of people from St Peter’s were invited to Wellington school to participate in the third mighty orchestra day. The day is to give people who aren’t in a large group of musicians the chance to play in an orchestra and play some music which sounds amazing and that they can say that they were involved in the orchestra. The orchestra formed by Wellington involved four different schools, us, Wellington, Exeter Cathedral School and King’s Taunton. The skills of the players varied from grade one all the way to diploma level which is over grade eight.

We were playing four pieces called In a Persian Market, Sabre Dance, Star Trek and Young and Beautiful. When we arrived at Wellington we were taken off into our section rehearsal which was taken by one of the teachers at Wellington. The strings teacher was really good and really inspiring and helped to break down the music so that it was easier to play. The funny thing was that there were 26 string players and 19 of them were from Exeter Cathedral School. The best bit, in my opinion, was playing all together in the great hall. It was really inspiring and helped me to improve mainly on counting because there isn’t so much for you to play in a big orchestra.

At the end of the day, there was a chance for us to perform to parents and pupils of Wellington School to show them what we had been doing over the day. When we performed, it was the best time that we played, it was an amazing sound that we created which really inspired me and made me want to keep playing when I got home. I spoke to a few of the other parents of performers and they said that the performance was amazing.

Overall I really enjoyed the day and I loved having the opportunity to play with some really experienced players.