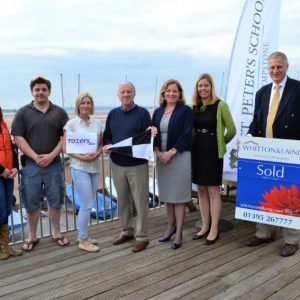 St Peter’s Preparatory School located in Lympstone has been announced as a gold sponsor of this year’s River Exe Regatta. The regatta is taking place on 8 and 9 July 2017 and is the result of a collaboration of the four River Exe Sailing clubs at Lympstone, Topsham, Starcross and Exmouth. This year the Exe Sailing Club (ESC) in Exmouth is hosting the regatta which will provide dinghy and cruiser racing opportunities. There is also a full programme of onshore social activities throughout the weekend.

Pupils from St Peter’s private school have recently competed in the IAPS’ (The Independent Association of Prep Schools’) Sailing Regatta in Portland. St Peter’s independent school entered three teams into the regatta on 24 and 25 May 2017. The year 5 team in the Under 11s RS Quba Class came 4th out of 40 boats and the other St Peter’s Prep team in that class had a year 4 helm and a year 6 crew and they came 8th. The school had one team entered in the Under 13s RS Quba Class of 37 sailing dinghies and this year 8 partnership took second place.

Deputy head of St Peter’s, Kerry Lord, comments: “We are very pleased to be sponsoring the Exe Regatta next month and wish all those taking part the best of luck. St Peter’s Prep School has a distinguished heritage of sailing. Olympic sailor Ben Rhodes, who is a former pupil, current parent and our speaker at this year’s speech day will undoubtedly tell our pupils about his journey from schoolboy sailing at the Exe Sailing Club to becoming the world champion in the 49er boat in 2007. Children at our school have the opportunity to take sailing lessons on Friday afternoons and I was delighted to take our keen sailors to compete in Dorset at the IAPS’ Regatta and with their success last month.”

Year 4 helm, Max, also recently competed in Weymouth at a Topper traveller event and he took 1st place in the 4.2 class. Year 5 helm, Will, won against a class of over 30 RS Tera dinghies the ‘RS Sailing Store Optimum Time Regatta’ at the Royal Dart Yacht Club on the River Dart during the weekend of 20 and 21 May 2017.