St Peter’s Preparatory School was represented by two teams of sailors at the Under 11 day of IAPS’ National sailing championships at the 2012 Olympic sailing venue at Weymouth and Portland National Sailing Academy. William and Josh in the performance class sailing an RS Feva and Max and Lola sailing RS’s latest boat, the Zest, amongst the nearly 100 other sailors.

Grey skies, rain and very strong winds in excess of twenty knots made cancellation look like a certainty. But, with the fleets making their way in very challenging conditions to the starting area, the starting sequence began on time. Unfortunately, not all the sailors were able to manage the tough conditions and retired. With Will and Josh being the only boat to complete the first lap, it was decided that they would cancel this race and progress to the next race in the championship. Races two, three and four were then completed with three further first places giving St Peter’s their first IAPS’ sailing National Champions!

The St Peter’s team was able to meet up with former St Peter’s pupil and Olympian, Ben Rhodes, for some words of encouragement. 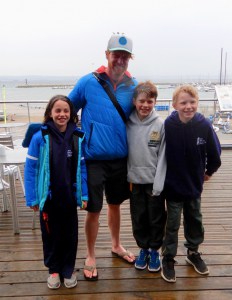