Teaching & Learning: The Importance of Maths

Maths…more than just a test…

Maths is incredibly important in our lives and, without realising it, we use mathematical concepts every day. The laws of mathematics govern everything around us.
This body of knowledge and practice is derived from the contributions of thinkers throughout the ages and across the globe. It gives us a way to understand patterns, to quantify relationships and to predict the future. Maths helps us to understand the world – and we use the world to understand Maths.

I asked our very own Head of Maths, Mr Simon Payne to discuss how Maths testing at St Peter’s has changed over the past few years and more importantly, why?

Assessing pupil progress in Mathematics in the Upper School

Over the past couple of weeks, pupils in the Upper School have been sitting their termly Mathematics test.

The mere mention of a ‘Maths test’ can polarise opinion (apologies, if I have dredged up some terrible memories)! Regardless of which side of the fence you sit, I challenge you to name more than a handful of better school memories than the sensation you got when you had a ‘Eureka’ moment in a Mathematics lesson, or that sense of satisfaction when you found out that you got a tricky question correct.

Whilst I am posing questions, what did you learn from doing a Maths test at school? How did your Mathematics teacher give you post-test feedback?

Personally, the former question is a very difficult one to answer. At a stretch, I could say that it told me that I had/had not done very well. However, the latter question is really easy to answer: either a raw mark, percentage mark, level or grade or raw score.

As a child of the 1980s/90s that was enough for me. As a teacher, I now see how utterly pointless such feedback was.

For the past four years, I have written Maths assessments in the Upper School that provide the pupils I teach (and parents too) with some meaningful post-exam feedback.

I can honestly say that I have not perfected it yet, but much like a child who has a wobbly tooth, I cannot stop playing with the tests in the elusive hope that one day I will complete the perfect assessment cycle! As you can imagine, my wife is delighted every time I bring out my laptop at home and I tell her that I’m going to ‘tweak’ (please do not confuse this with ‘twerk’) a test.

A photo of the range of assessment feedbacks available to Upper School pupils can be seen below: 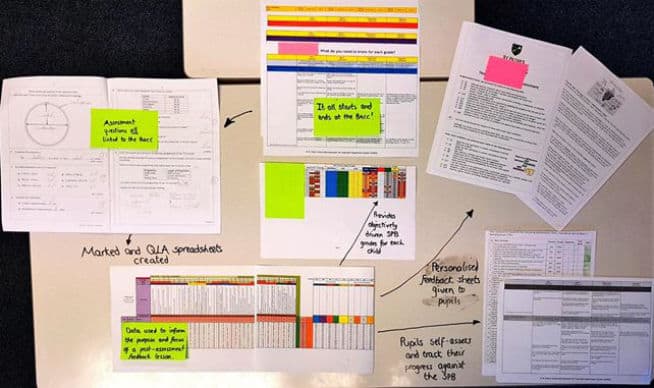 So, for those of you who are interested, here is an insight into my Golden Rules for providing effective post-test feedback in Mathematics:

Golden Rule 1: Never give out a percentage mark.

When I return a test paper, I can guarantee that the first question I will almost always be asked is: “Sir, what percentage mark did I get?”.

Being the cantankerous type I never answer that question (most pupils in Year 6, 7 and 8 should be able to calculate this for themselves anyway)! Instead, I will always encourage the child to consider how well they feel they have answered each question.

I believe that giving back a percentage mark reveals nothing meaningful in the slightest (except for the obvious). What does a pupil learn from receiving their percentage score? Perhaps, some bragging rights? A sense of success/failure? A number to compare with their peers?

Giving a child their percentage mark (or raw score) on the front page of the paper will not aid their progression BUT asking them to look inside and give careful consideration on how they performed on each question might just do.

Golden Rule 2: Never grade or level a test (except the final Baccalaureate exam!)

One thing I have learned from 15 years of teaching is that the grade a pupil achieves at the end of a natural cycle (be it at the end of a 2-year St Peter’s School Baccalaureate® cycle, GCSE study or A-Level course) will look after itself IF throughout this cycle that child has been encouraged to learn from previous errors and has been provided with ample guidance on how best to improve.

Historically, the principles behind levelling/grading were solely for the purpose of reporting an end of a key stage result (i.e. at the end of Year 2, 6, 9, 11 and 13). It was never intended to be used at other times. Unfortunately, the reality within schools was very different. At some point, although please don’t ask me as it crept up on us all; each level was arbitrarily broken up into three different sub-levels (a,b and c). This meant that every child was sub-levelled to within an inch of their life, with most subject specialists knowing far more about the ‘target’ level (or their GCSE grade post-Year 9) for that child than anything truly remarkable about them. (I strongly suspect this system was created and promoted by powerful educational publishers, who wanted to sell expensive assessment and tracking packages to anxious schools).

Therefore, measuring pupil progress using ‘sub-levels progress’, which in turn was often used to measure staff performance (through the form of a Performance Management target), was never a fair statistical measure and was certainly an abuse of the well-intentioned origins of the ‘level’.

In 2019, you could arguably say that making direct comparisons between two pupils, who have close standardised scores on a GL Assessment, is equally as meaningless. Take the scores of 106 and 111 for example: yes, you have two “average” pupils for their age, but what does this score reveal about what pupils actually know and what they can do to improve?

More pertinent questions a child/parent should be wanting to know, as an outcome from an assessment, is:
What skills went well? (All successes, no matter how big or small, should be celebrated)
Which skills still require further development? and
What next steps can be put in place to order to support them with it?

Whenever I tweak the Upper School assessments, I always start and finish the process by considering how a question fits into the St Peter’s School Baccalaureate®.

At the start of Years 5 and 7, all pupils at St Peter’s are issued with a copy of the Mathematics Skills section of the St Peter’s School Baccalaureate®. This document lays out all of the Maths skills that make up that child’s two-year Baccalaureate cycle. These skills are grouped in such a way that it should be straightforward to determine which skills, if any, precede them (i.e. assumed pre-requisite knowledge) and how this skill will be developed further later in the course.

In other words, in the Upper School, we share with our pupils a complete learning journey for Mathematics and we help them to navigate through it.

Since every question, on every assessment, has been carefully cross-referenced against these St Peter’s Baccalaureate® Mathematical Skills, this means that we are able to provide detailed and personalised feedback for every child.

The benefits of this are two-fold: (1) it enables staff to track pupil progress against each of the different mathematical strands that make up the Baccalaureate (which should lead to more accurate grading judgements), and (2) pupils can feel involved in their own learning by allowing them to track their progress on their own version of the Bacc grid.

So, there you have it!

I am sure that you will agree that the 21st-century assessment cycle is slightly more involved than it was back in ‘our’ day. However, the traits that make a good learner; namely resilience, self-discipline, honesty, open-mindedness, honesty and a little bit of joie de vivre will always remain timeless.