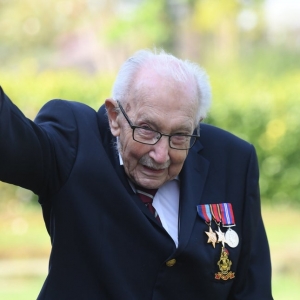 This week is Children’s Mental Health Awareness Week; thank you very much to Mrs Wellington-Smith and Mr Budgett for putting together a fantastic week of events, focusing on time together. Please do join him for our family quiz on Sunday evening to wrap up a really wonderful week. Details later on in this newsletter. I am delighted to share with you tremendous news that all six pupils in Year 8 who applied have received an offer of a place at Exeter School. Our Head of School, Max C, received the top award. This is a fantastic achievement and continues our success with St Peter’s gaining the top award every year for the last five years.

This week, we received the very sad news of Captain Sir Tom Moore’s passing. As a school, we loved cheering on Sir Tom, as he walked his 100 laps around his garden, and we have followed his incredible year and marvelled at the amount of money he raised. His cheerful determination and stoicism touched the
Nation and he raised millions of pounds for the NHS charities. Initially, Sir Tom had hoped to raise £1000 for charity and had said “One small soul like me won’t make much difference”. But, what a difference it made…£32 million pounds of difference. However, it was more than the money. Captain Sir Tom Moore
was an inspiration to us all during difficult times and, through his courage, perseverance and strength at the age of 99, he united a nation. The Prime Minister paid tribute to him in this video clip and the Union Jack was flown at half mast in his memory; I must admit to feeling rather emotional while watching this after another long week of February lockdown! Do take a moment to watch it though and take time to consider his wonderful story, as it brings about a moment of reflection on what has happened in the space of one extraordinary year.

We are so looking forward to being back together on-site. There are many mixed messages and rumours in the press. What we do know is that there will be clarity on 22 February, which we eagerly await.

Thank you for your ‘Dress-up your pet’ challenge submissions. The ones in uniform were particularly hilarious. ‘Ted Collyer’ and ‘Rambo Radcliffe’ below, as well as a black Lab in a St Peter’s cap (unnamed).  Do let me know!

Next week, the challenge will be: MOONWALKING. Those of you with teenagers will be aware of this craze at the moment. Watch this video, then have a practice and record yourself and send it in. The more family involvement the better. Have a lovely weekend! Also, enjoy the House Pancake Flip Challenge in the activity programme.